In addition to the breathtaking views this world-famous skyscraper offers, the striking lobby of the Empire State Building and its two main exhibits are worth spending some time checking out as well.

With The New York Pass, admission to the Empire State Building is included, along with admission to more than 130 attractions in the city at a steep discount compared to paying at the gate of each attraction.

Experience the best of NYC at the pace you choose and visit as many sites as you want each day for one low price with this flexible pass. Simply put, you decide what to see and when you want to see it! Learn more about our available passes and attractions. 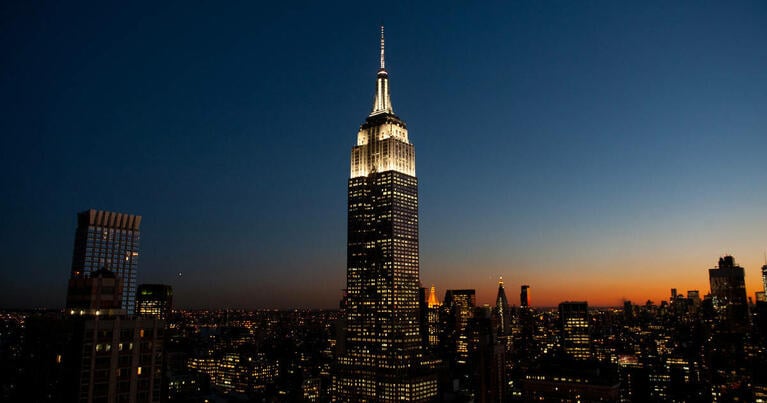 Traveling with young kids? Plan to visit the Empire State Building early, when the building tends to be the least crowded and lines are shorter. If you're traveling with a stroller, you'll need to fold the stroller up before getting into the elevator, so plan accordingly. The restrooms are on the second floor, and it’s a good idea to use them before getting in line to ride the elevator.

Couples looking for a romantic time can find it at the Empire State Building as well. The best times to get the coziest view are (rather obviously) at sunset. Every Thursday, Friday, and Saturday night from Memorial Day to Labor Day, a saxophonist plays romantic music to help make the experience more memorable for you and your date.

Some couples arrange to get engaged or even married at the Empire State Building.

If you're not traveling with kids or looking for a romantic time, you have total flexibility when it comes to choosing an ideal time to visit the ESB. If your main goal is to spend time taking in the exhibits, head to the ESB earlier in the day to avoid the largest crowds. If you're looking for the best time to take photos, we suggest aiming to be at the top an hour before sunset (be sure to allow for wait times in line) known as 'the golden hour.'

Each member of your party will need to pass through security to enter the Empire State Building. There are no lockers or coat checks, so you must carry whatever you bring in with you throughout your visit. Tip: restrooms are on the second-floor visitor's center - it’s a good idea to use them before getting in line to ride the elevator. 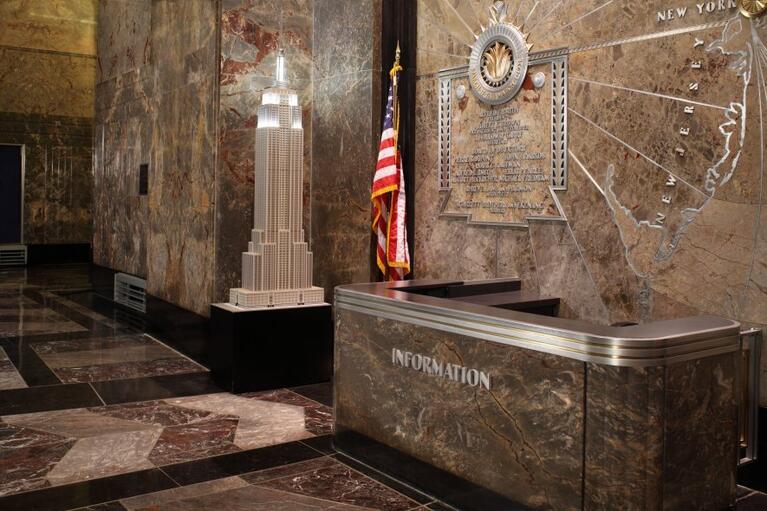 Your experience begins the minute you walk in the door of the Empire State Building. From the Art Deco-inspired ceiling murals to the aluminum leaf, the sites of the lobby are unique and historic.

The Landmarks Preservation Commission designated the lobby as a historic landmark following an 18-month restoration project in 2009 it to its original 1930s appearance. 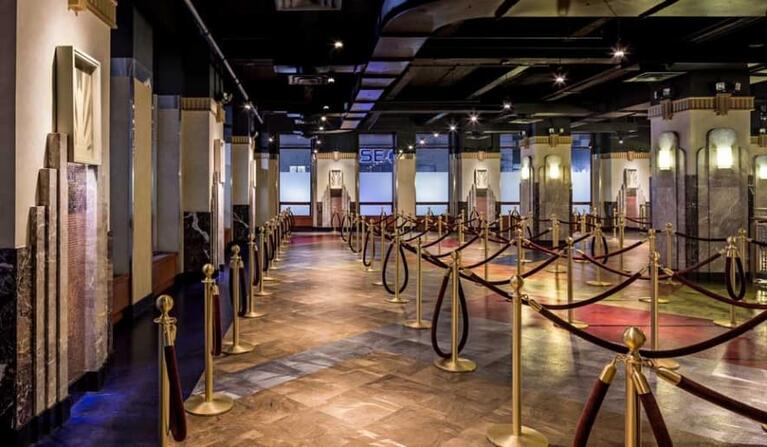 This space was designed as the first official 'welcome' for visitors to the Empire State Building. This is where you'll show your tickets to enter the exhibits and you can use the restrooms before heading up the elevators. 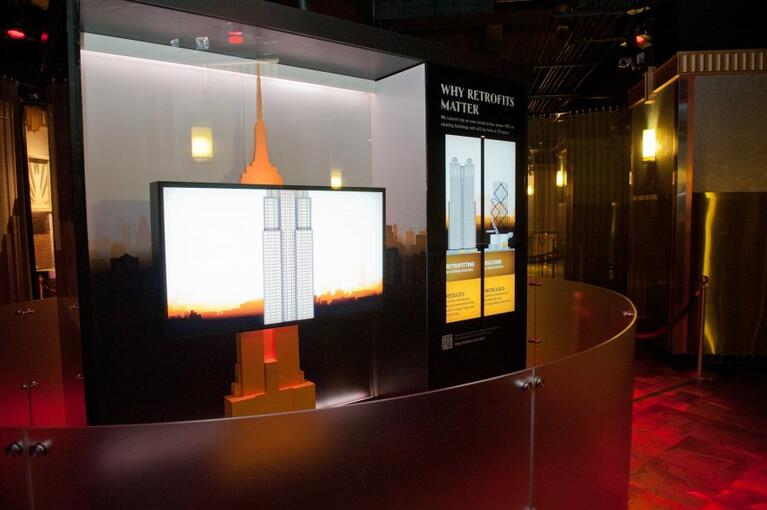 The Empire State Building underwent a massive sustainability project in 2009 that would ultimately reduce its energy costs by 4.4 million dollars per year, reduce over 105,000 tons of carbon emissions, and reduce the building's usage of energy by 38 percent – a modern-day engineering feat! The Sustainability Exhibit on the second floor educates visitors about the building’s retrofit project. It describes every process used in the energy overhaul with displays of actual building materials, sculptures, and digitally interactive displays. 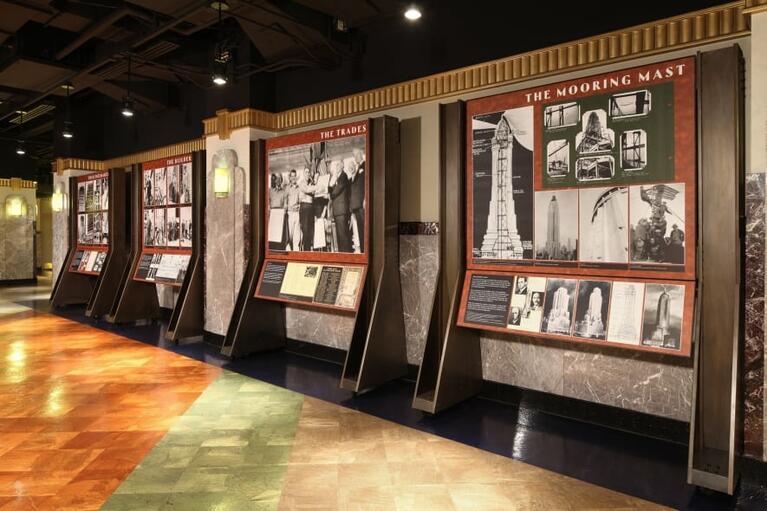 Located on the 80th floor, the Dare to Dream Exhibit chronicles the history, construction, and engineering process. It includes original photographs and documents from the 1930s as well as construction notes, architectural sketches, and personal mementos from some of the 3,400 people who worked tirelessly to make the Empire State Building a reality. 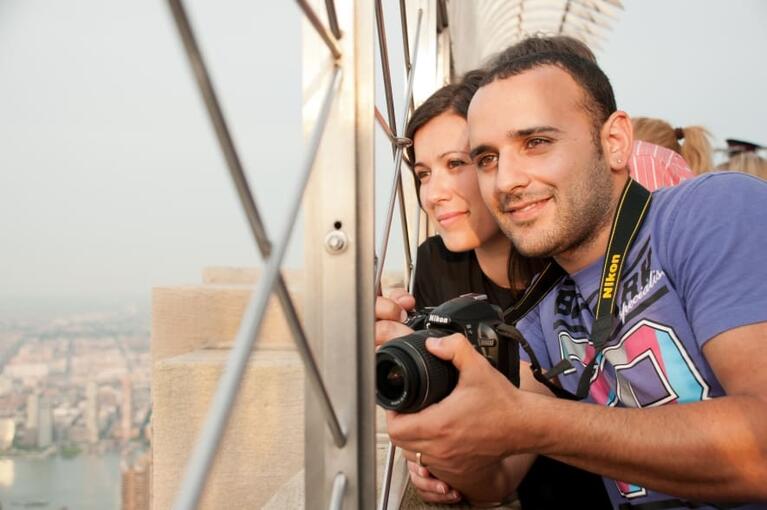 The famous main deck of the Empire State Building has made it into dozens of movies and television shows. It provides you with an open-air 360-degree view of the Brooklyn Bridge, Central Park, East River, Hudson River, Times Square, the Statue of Liberty, and much more.

Tip: download the Empire State Building's app on your phone to help identify each building you see in your view so you can learn more about the landmarks and sights. Bring coins if you want to use the coin-operated high-powered binoculars. 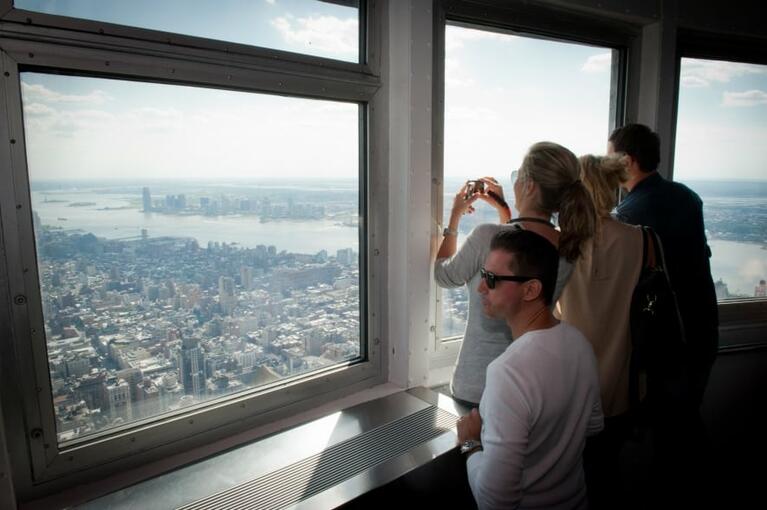 From this high up, you can see the grid of street patterns and a clear view of Central Park. If the day isn’t overcast, you can view other skyscrapers at a distance up to 80 miles away. You will take a manually-operated Otis elevator to the top floor, and our elevator operators will be happy to answer any questions you have. The 102nd-floor observation deck is enclosed with glass.

A little background on the Empire State Building's location:

Different mansions appeared on the property over the next 131 years before their owners decided to knock them down. Another notable landmark on the site was the Waldorf Astoria Hotel until 1928.

You'll definitely want to bring your camera to take once-in-a-lifetime photos of the amazing views and make sure you have a stash of quarters if you want to use the coin-operated binoculars on site. The main observation deck on the 86th floor is also an open-air observation deck, so be sure to dress warmly due to the wind and if it's sunny you may want a wide-brimmed hat and sunscreen.

Plan to allow a minimum of two hours for your visit. To ensure the safety of every visitor and the integrity of the building, the management of the Empire State Building prohibits people from bringing several things inside. The following items are strictly prohibited:

Where to Eat Nearby 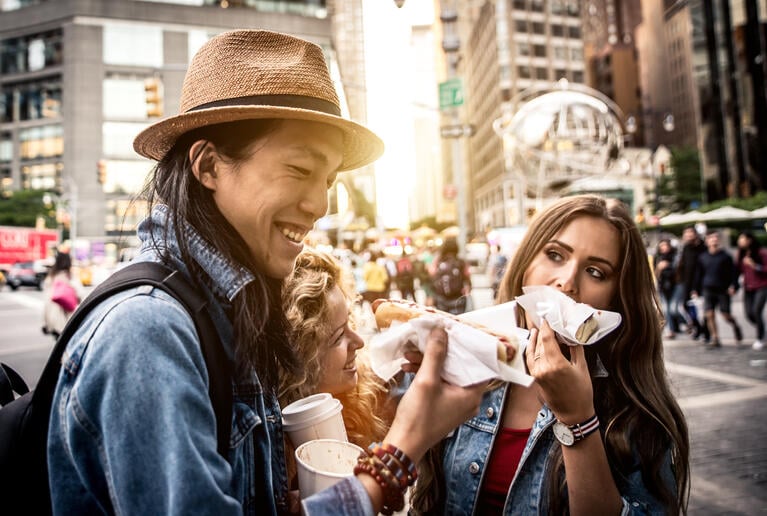 This attraction has several restaurants inside of it, including:

If you prefer to eat elsewhere before or after your visit, some unique choices are the Playwright Irish Pub and Kang Ho Dong Baekjeong. Both are under a quarter mile of 350 5th Avenue, the official address of the Empire State Building. Some of the signature menu items at Playwright Irish Pub include bangers and mash, fish and chips, and shepherd’s pie.

At Kang Ho Dong Baekjeong, a local Korean restaurant, you can enjoy kimchi, a pork combo, short ribs, and several other Korean specialties.

Attractions Near the Empire State Building 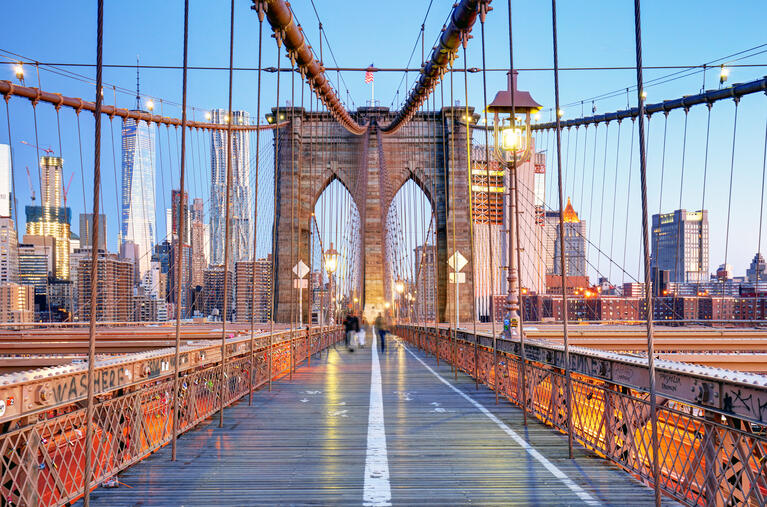 Of course, New York City has several other famous attractions besides the Empire State Building. Depending on the time you have available for sightseeing, consider adding the following attractions to your New York City itinerary:

If you're looking for Empire State Building discount tickets, remember to can save on combined admission to the Empire State Building Observation Deck and over 90 other popular NYC attractions, including Top of the Rock Observatory, Big Bus Hop-On Hop-Off Tours, Museum of Modern Art (MoMA), Circle Line Sightseeing Cruises, Central Park Sightseeing Bike Tours & Rentals, and many more!

Things to do in New York When it Rains