NYC Observation Decks: One World Observatory vs. Empire State Building vs. Top of the Rock

Casey Makovich
Share this post
Copy Email Share Tweet
Visiting one of New York City's iconic observation decks is a must-do lifetime adventure.
There’s an endless amount of fun things to do and historical landmarks to see, but a visit to an observation deck (or two, or three...) is one of the most memorable things you can do on your trip to NYC. Plus, it's a great way to 'see' everything there is to see in NYC.
New York City is home to 3 of the best observation decks in the world: the Empire State Building, Top of the Rock and One World Observatory. We've put together a comparison of New York's most popular observation decks so you can get an idea for what the difference is between the Empire State Building vs Top of the Rock vs One World Observatory so you can decide which one suits what you want to do and see best.

1. The One World Observatory

The One World Observatory is an icon of the city skyline with its amazing spire. Travelers can take one of its 70 elevators up to three observation decks in under 50 seconds; it's an elevator ride that feels like a launch. The views: One World Trade Center is located on the south-western side of the Manhattan peninsula (close to the tip of the peninsula), so you'll get close views of the Hudson River, New Jersey, and Manhattan. You can see Ground Zero, the 9/11 Memorial Museum, and the Financial District. You'll be able to see the Empire State Building (though your view will be farther than from Top of the Rock) and Top of the Rock (though you might need to reference a skyline map to pick it out from its surrounding buildings!). All around, it has views that stretch from Westchester and Rockland counties to New Jersey, Brooklyn, and Long Island in addition to the mighty metropolis of NYC. Then, step into the Main Observatory and view high-definition footage of Manhattan’s streets. Enjoy some artisanal cocktails the bar One Mix and indulge in some culinary delights at One Dine. The structure and its observatory decks are a rebirth of downtown Manhattan after the tragedy of 9/11. Experience the city's rebirth. Admission: One World Observatory tickets are sold separately from The New York Pass. 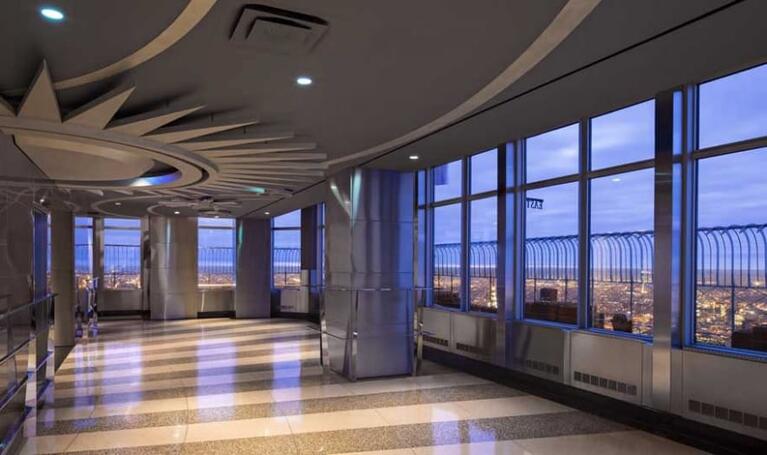 The Empire State Building (ESB) shows 360-degree views of the city. At night, this international icon displays dazzling light shows to celebrate various occasions, which are often synchronized to music. In addition to its 86th-floor observatory, there's the Top Deck. You can see up to 80 miles away and get a full picture of the city. The views: the Empire State Building is located right in the middle of Manhattan, so from its top Observation Deck, you’ll get one-of-a-kind vistas of the Brooklyn Bridge, Central Park, the Statue of Liberty, Times Square, and the brilliant city streets below. You'll also be able to see New York City's other popular observation decks; the view from ESB of One World Observatory is much closer than the view you get of it from Top of the Rock, and similarly, the view from ESB of Rockefeller Center is much closer than the view you get of it from One World Observatory.  Be sure to check out the Dare to Dream exhibit, which pays tribute to the builders and architects who helped create this historic landmark. There are period photographs, mementos, architectural sketches, and more. If you plan your visit to the Empire State Building around meal time, consider dining at its STATE Grill and Bar for breakfast, lunch or dinner. In exceptional Art Deco design, it showcases New York State’s winemakers, brewers, and farmers.
Admission: Empire State Building tickets are included with the New York Pass. 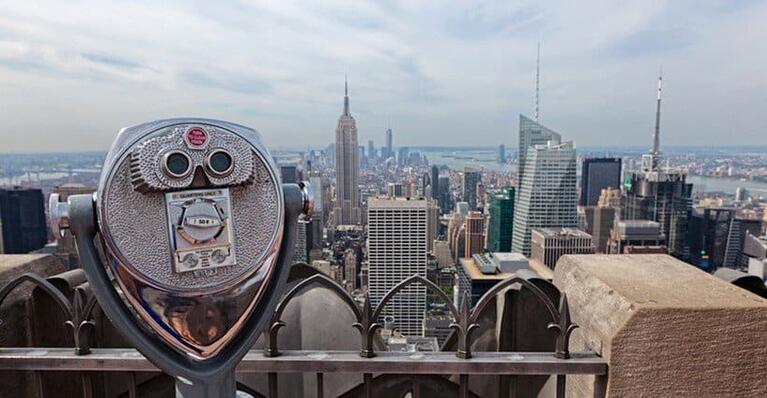 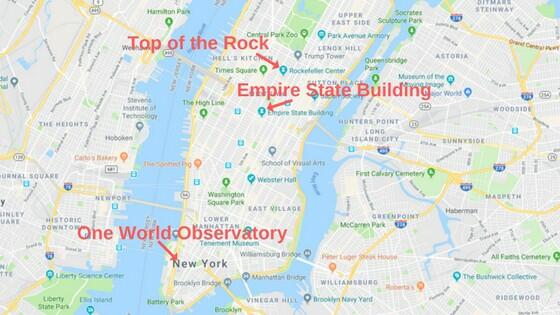 Each observation deck experience provides an educational and informative experience on your way up to the observation deck complete with exhibitions and displays. The locations: where each building is situated will impact your views from each of the observation decks. See the image above for a better idea of where each observation deck is relative to the others. The exhibits: One World Observatory, being the most recently built, features a more modern design and feel and its exhibits explore the development of downtown Manhattan and the impact of 9/11 and how the One World Observatory building came to be. Top of the Rock and the Empire State Building both offer a classic and nostalgic New York City experience that highlight the history of the city with a particular emphasis on the American dream and the eventual prosperity post-Great Depression era. The views: the biggest difference between One World Observatory vs Empire State Building vs Top of the Rock is the view you'll get at the top. Of course, whichever observatory deck you choose to visit, you won't see that building in the skyline.

Popular Things to Do Nearby

In addition to these 3 observation decks (One World Observatory, the Empire State Building, and Top of the Rock) there are other great sites and activities worth checking out while in NYC.

This world-famous park is 36 acres of beautiful streams, waterfalls, rocks and winding trails. It’s ideal for strolling and a wonderful sight from each of the observation decks.
Take a romantic paddle around the lake or even a Venetian Gondola ride at Loeb Boathouse. Savor some great fare like crab cakes at the Central Park Boathouse Restaurant. Monkey around at the Central Park Zoo. There’s even pot-bellied pigs, penguins and sea lions. You never have to wait for the carnival to come to town in NYC.
In the summer, head to Victorian Gardens for an all-American day of juggler performances, cart rides, and funnel cake. In the winter, hit the ice for some ice-skating.

You can take a ferry over to the Statue of Liberty on Ellis Island. Visit the crown and see panoramic views of Brooklyn. This colossal copper statue was designed by artist Frederic Bartholdi. It’s the symbol of freedom.
The Liberty Island Museum is located in the lobby of its pedestal and chronicles the history of freedom. At the pedestal, you can great views of New Jersey, New York, and the New York Harbor.
Getting in: Statue of Liberty and Ellis Island Immigration Museum tickets are included with The New York Pass. 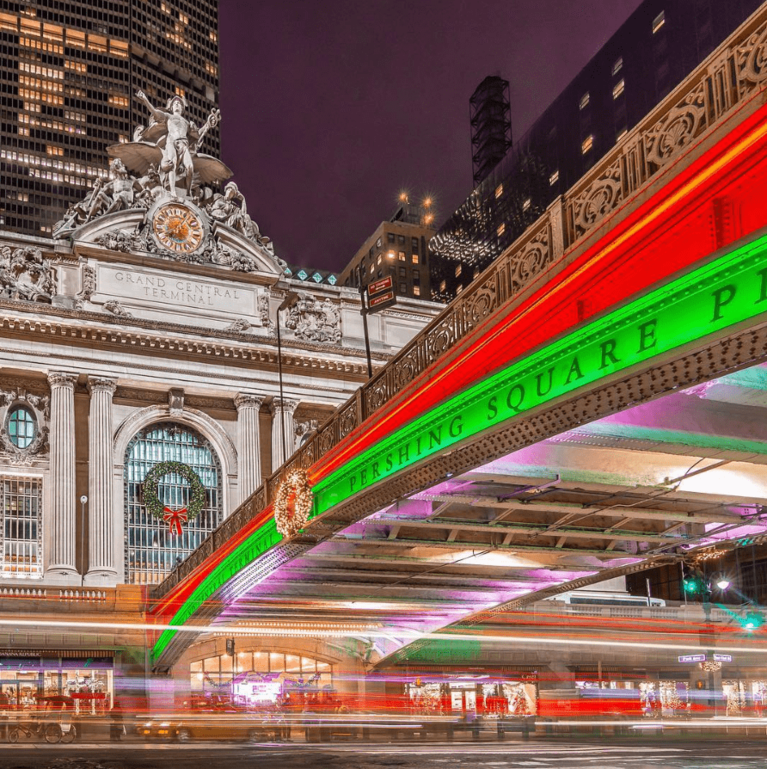 The American Museum of Natural History

Roam the labyrinthine corridors of the colossal Metropolitan Museum of Art where you view more than 2 million works of art showcasing 5,000 years of history.
Its Egyptian collection features stone sarcophagi inscribed with hieroglyphics and pages from the Egyptian Book of the Dead.
Other highlights include the American Wing with collections of American Arts. There are also stunning Islamic galleries with metalwork and ceramics. Its roof garden serves up fabulous views of Central Park and the city skyline.
Getting in: The Metropolitan Museum of Art tickets (with Fast Track Entry!) are included with The New York Pass.

Just years ago, the High Line was a railroad track carrying freight trains. Today, it's a railway-turned-beautiful city retreat situated high above the busy city streets.
Take a stroll along the path and check out the park's many features, including picnic tables, seating, curving walkways, and well-manicured gardens while you take in the unique views of the Hudson River and Manhattan skyline.
Getting in: admission to the High Line is free and open to the public.

Remember to Save on Observation Decks and Attraction Admission

New York City's top 3 observatory decks are at the top of many tourists itineraries. They're all popular attractions, but how can you manage to afford the admission price at each? New York Pass grants you free admission to two of these Observation decks, with  Empire State Building tickets and Top of the Rock tickets, plus, admission to over 90 additional attractions in NYC. Get a New York Pass and start saving on admission to top attractions during your trip. For more information on the New York Pass, click here.
Tags
Tips and advice
Previous post